What sectors and states will be affected by trade wars: a data-driven analysis

We study the trade war impact on US economy by analyzing annual filings from all US domestic listed companies to SEC, and have the following findings: 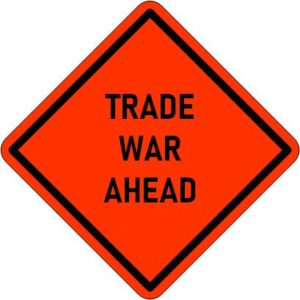 OUR FOCUS IS DOMESTIC LISTED COMPANIES

The trade tension between the US and China is heightening. The stock market is already starting to react, as investors are dumping stocks of companies which either rely on imports from China or supply products to Chinese market. In addition to stock market investors, local residents in some states are also anxious following the progress of the trade tension, because their local economies are closely linked with the trading relationship between these two countries.

Domestic listed companies represent the economy well, and their abundant public information forms a sound base for data-driven analysis of factors such as trade war impact. By using artificial intelligence techniques, FMeasure Inc. has extracted and reviewed latest trade war related information for all US domestic listed companies filing annual reports to US Securities and Exchange Commission (SEC), and had the following findings:

24% companies openly admit that they will be affected by trade tensions. The top 10 of them sorted by their market caps are in Table 1.

Some of these companies are well-known to be sensitive to trade tensions, such as Apple and Walmart. Others may not be so obvious. They feel the pain from trade wars through an indirect channel. We list below some quotes from Microsoft, Visa and Bank of America as examples to illustrate this.

Microsoft: “Changes to trade policy or agreements as a result of populism, protectionism, or economic nationalism may result in higher tariffs, local sourcing initiatives, or other developments that make it more difficult to sell our products in foreign countries.”

VISA: “The current trade environment reduces the likelihood of having our Bank Card Clearing Institution application in China approved.”

Bank of America: “Changes, or proposed changes to certain U.S. trade policies, particularly with important trading partners, including China, could upset financial markets, disrupt world trade and commerce and lead to trade retaliation through the use of tariffs, foreign exchange measures or the large-scale sale of U.S. Treasury Bonds.”

MOST SECTORS WILL BE AFFECTED, ESPECIALLY THOSE THAT US COMPANIES HAVE TECHNOLOGY ADVANTAGES, SUCH AS PHARMACEUTICAL AND SEMICONDUCTOR.

The trade war is going to impact widely on many sectors (classified using Standard Industrial Classification Codes) of the US economy.

We have extracted text explanations on how trade wars affect their businesses for all those affected companies. It could be as direct as higher Chinese tariff leads to lower sales, or as complicated as the potential trade war escalation could trigger higher regulatory barrier of market entry into China.

Table 3: Top 25 major sectors (sorted by percentage of companies to be affected)

CERTAIN STATES MIGHT BE HIT HARD IN THE TRADE WAR

Table 4: Top 10 affected states (sorted by percentage of companies to be affected)

Table 5: Top 10 affected states (sorted by number of companies to be affected)

The bottom-up research results shown above indicate that the trade tension between US and China will have vast impact on many sectors and regional economies, some of which are not that obvious. We hope the analysis will be useful to investors and policymakers.

Questions, comments and requests can be sent to FMeasure Research Team (team@fmeasure.com).

In “trade war impact on US industries” blog, we list all 247 sectors that are going to be significantly affected by trade wars.

IMPORTANT DISCLAIMER AND DISCLOSURE INFORMATION
This report is prepared and circulated for informational and educational purposes only and is not an offer to sell or the solicitation of an offer to buy any securities or other instruments. The information contained herein is not intended to provide, and should not be relied upon for investment, accounting, legal or tax advice. This document does not purport to advise you personally concerning the nature, potential, value or suitability of any particular sector, geographic region, security, portfolio of securities, transaction, investment strategy or other matter. No consideration has been given to the specific investment needs or risk-tolerances of any recipient. The recipient is reminded that an investment in any security is subject to a number of risks including the risk of a total loss of capital, and that discussion herein does not contain a list or description of relevant risk factors. As always, past performance is no guarantee of future results. The recipient hereof should make an independent investigation of the information described herein, including consulting its own tax, legal, accounting and other advisors about the matters discussed herein. This report does not constitute any form of invitation or inducement by FMeasure Inc. to engage in investment activity.
The views expressed herein are not necessarily the views of FMeasure Inc. or any of its affiliates (collectively, FMeasure), and may be derived from the FMeasure system. Such views (i) may be historic or forward-looking in nature, (ii) may reflect significant assumptions and subjective judgments of the contributors to the FMeasure System as well as, in some instances, the authors of this report, and (iii) are subject to change without notice. FMeasure may have market views or opinions that materially differ from those discussed, and may have a significant financial interest in (or against) one or more of such positions or theses. In some circumstances, this report may employ data derived from third-party sources. No representation is made as to the accuracy of such information and the use of such information in no way implies an endorsement of the source of such information or its validity.
This report may include certain statements and projections regarding the anticipated future performance of various securities, sectors, geographic regions or of the FMeasure System generally. These forward-looking statements are inherently subject to significant business, economic and competitive uncertainties and contingencies, many of which are beyond our control. In addition, these forward-looking statements are subject to assumptions with respect to future business strategies and decisions that are subject to change. Factors which could cause actual results to differ materially from those anticipated include, but are not limited to: competitive and general business, economic, market and political conditions in the United States and abroad from those expected; changes in the legal, regulatory and legislative environments in the markets in which FMeasure operates; and the ability of management to effectively implement certain strategies.
FMeasure makes no representations, express or implied, regarding the accuracy or completeness of this information, and the recipient accepts all risks in relying on this report for any purpose whatsoever.